A poem by Ashraf Fayadh

This is Fayadh's first work since he was detained in Saudi Arabia.
First published by The Guardian.

Tense times for me,
and sleep’s acting like a newly love-struck teen.
I shall disregard the state my heart’s in
and my mind’s upheavals like water bubbling
past the boiling point.

Neutrality: an illusion
like all the graces of which humans speak,
so shamelessly theoretical.
Truth is an inadequate term, just like Man,
and love bumps about, a miserable fly
trapped in a cube of glass.
Freedom is very relative:
All said and done we live in a circular prison
With its bars of ozone;
and when we are set free
our fate is certain death.

I am incapable of laughing.
Completely incapable of smiling, even.
Incapable, at the same time, of crying.
Incapable of acting like a human being
which doesn’t upset me in the slightest
though it hurts so,
to have a body covered with light down,
to walk on two limbs,
to depend wholly on your mind,
to be drawn after your desires to the furthest point,
to have your freedom trapped,
to have others decide to kill you,
to lose those closest to you
without a chance to say farewell.

What good does Farewell do,
But to leave a sad impression?
What good’s meeting?
What good’s love?
What good is it to be alive
to this degree
while others die from sorrow
over you?

I saw my father for the last time through thick glass,
then he departed, for good.
Because of me, let’s say.
Let us say because he could not bear the thought
I’d die before him.
My father died and left death besieging me
without it frightening me sufficiently.
Why does death scare us to death?
My father departed after a long time
spent on the surface of this planet.
I didn’t say farewell as I should have
nor grieve for him as I should have
and was incapable of tears,
as is my habit, which grows uglier as time passes.

The soldiers besiege me from all fronts
in their uniforms of poor color,
laws and regimes and statutes besiege me.
Sovereignty besieges me;
its highly concentrated instinct
cannot be shaken by living creatures.
My loneliness besieges me,
my loneliness suffocates me,
I am choked by depression, nervousness, and worry,
remorse, that I’m a member of the human race,
kills me.
I was unable to say goodbye to all those I love
and who departed, even temporarily.
I was unable to leave a good impression about a final meeting.
Then I yielded to the rifles of longing
leveled my way.

I refused to raise my hand
and became incapacitated.
Then I was bound by sorrow
That failed to force me to tears.
The Knowing gnaws at me from within,
killing every shot I have at survival.
The Knowing is killing me slowly
and it’s much too late for a cure. 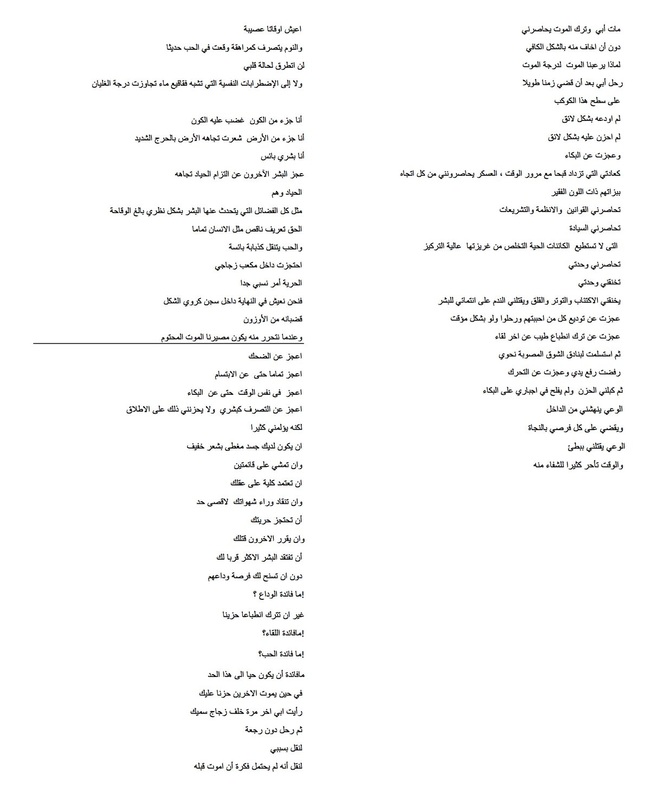